Today was a morning that I got to go into something amazing in the Spirit with Papa. This encounter may shatter some religious boxes, but I encourage you to read it and ask the Lord what you can do to participate in this. As I went to spend time with the Lord today this is what happened.

“Come my love and sit with me. I am longing for you too. Come and let’s talk about today. This is going to be a week of lots of big important moments. Hold tight to my hand and trust my leading. What do you see as you close your eyes and rest? I look and I see a field in heaven with my horse Freedom running around with such joy. Looking into the eyes of Freedom. As I looked I saw expectancy and a desire for me to come for a ride. 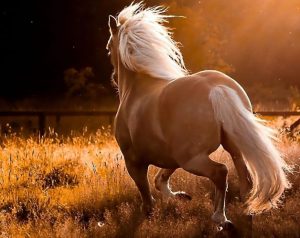 Jesus and I climbed on Freedom and were off running through a field in heaven. My heart was racing at the pace we were at. My body felt like it was flowing in the air as I was part of Freedom’s pace. We were moving together so quickly I didn’t know where we were going and never realized until I looked around that we were no longer in the field but we were in space. As we traveled through space I saw things I never saw before. I saw really large creatures that were like something from the sea but they were traveling/flying in space. I would have normally been afraid, but I had such peace that these magnificent beasts were a creation from the Father. As I listened, I could hear their call and it reminded me of a whale but different and just as beautiful. As they moved through the sky I saw that they were clearing areas of what looked like debris. Suddenly I looked and I saw that Journey was waiting up ahead. (Journey is a heavenly ship that the Father created a while ago, in order to accomplish mandates and bringing healing, provision, and restoration.)

As we approached, Jesus said, “We have something to do today in the spirit. I will need to show you something first.” As he said this, instead of going into the ship we landed on top. As we did, I could see we were very close to earth’s orbit. Jesus pointed to the atmosphere of Earth. I could see the debris that was floating around our planet. It was both in the natural but also In the spirit. There were great large pieces of space junk floating as well as what looked like clouds of darkness, ashes, and other dust. I also could see things that looked like great wounds on the atmosphere of our planet as well as the surface below. This was all in the spirit but yet I knew it was in the natural too. as I watched, I saw these large beings with dark wings taking large loads of what was this dark ash and throwing it into these already well-formed clouds. As the ash was spread, I could see below the ground responding in pain. Even the air below was heavy with sickness from what was happening in the spiritual atmosphere above. For as I looked I saw the darkness. I asked Jesus what it was.
He responded, “This is the curses and witchcraft that had been spoken over the land. It is every dark word and every word that has brought death or harm to this planet and its inhabitances. Your words have power and when death comes it is toxic and it remains until it is recognized and removed. The curses are even from Sons and Daughters of God. Now you see them. What will you do?”

My heart was so full of sorrow for every curse and word that had brought death. In this moment, I repented on behalf myself and my people and the words that had been spoken that had been part of this toxic mess.

“What can we do?” I asked. As I said this an Angel named Redemption came with a scroll from the Father. I took the scroll and went inside of Journey. As I stepped inside I felt the warmth of this heavenly spaceship. Although it was large and powerful it was also very welcoming and warm. As I opened the scroll I heard the Father say,

“Go to the place where the earth is in your hand
and speak to the ground and give your command.
For both death and life
are in the power of your tongue.
So remove the death and release life
For my glory can be released at your hand.”

As I looked at what Papa said, this I saw a picture of exactly how this would happen. Stepping to the controls of Journey, I place my hands on the controls and adjusted the ship into a place where this exactly could happen. For I saw that the Father needed me in a place that I could literally place the earth in my hands visually. I came back on top of Journey and began speaking the following over the earth:

As I said this, I was holding the earth in my hands but as I looked I realized Papa’s hands were holding mine. His Arms were around me, as I turned around I looked and saw the Father standing there with a big grin. We hugged and He said, “I have given my children the ability to create and restore with me. Let us do this together and see what happens.”

With our hands back under the earth, I then began speaking into the situation, “Darkness, Curses, and Witchcraft go right now!” We then began brushing the debris off the earth. As we did the toxic darkness was separated from the earth. The next thing I saw was this same creature that I saw before coming and actually began eating the debris. It was completely gone. As the true nature of these areas were expose you could see the wounds in the spirit that were over these areas. The area where I saw the toxic atmosphere was, particularly over North America. I then spoke life and health back into the area.

“North America, I speak life and blessings over you and your inhabitance. You are a blessing and not a curse. Come Alive! Hope Arise! Be made whole once again!”

I saw many angels go and begin to minister to the land. It was like they were pouring out bowls of liquid gold healing oil. As it covered the earth and it’s inhabitants. I saw places where the dry land become refreshed and new life began to grow. I saw cities that had been cursed for so long and were filled with empty buildings and starving people become filled with new businesses and safe communities filled with new life. People began to restore and revive the cities. I also saw people coming to old church buildings that were once desolate and began to sing new songs and speak words that healed people and restored rather than cursing and separating. These churches were no longer buildings but communities that began to change. The buildings were torn down and replaced by community centers that were full of the glory of God. They didn’t look like a religious church system or government, but rather a Gathering Place and the families came together and brought healing to the communities around them. The walls of division were torn down and the doors were opened once again.

Families that were once considered unacceptable or broken were called whole and the children which were once considered the most broken were taught to lead and to dream once again. I saw Children taking over old broken down lots and turning them into gardens and places where fun was made in creating new things. The children began to create new ways of bringing new life and creativity to what seemed like child’s play. Families began working to help those in need around them.

I began seeing groups of people from across the country coming together to bring networks that connection into creating change across their nation. Another thing I saw was a transfer of information to the children of our nation with ideas that would transform the land. They were given ideas and dream of new technology and inventions that would cause great innovation. That in their creativity with the land they would develop ways to restore the land and purify what has been toxic in the land.

As God’s Children began walking in each of these things, the vision accelerated quickly in the timeline…Moving faster and faster I began to see what was like a golden thread that was woven over our nation from city to city, person to person. An angel would move it from one place to another. With each piece, it was like a woven gold mantel was covering our nation.

As I saw these things, I realized I was seeing into the destiny of our nation and what was to come. As I moved my hands away from the earth I saw the gold on my own hands. Turning to Papa, I hugged Him tightly and thanked Him for being a part of seeing redemption come to our nation and world. As I did He placed His hands on my face and kissed my forehead. I was overwhelmed by His goodness and His glory.

“Papa, would you take this same encounter, and reveal it to others for their nation and for their land. That we may bring life and restoration.”

He responded, “The meek shall inherit the earth.”